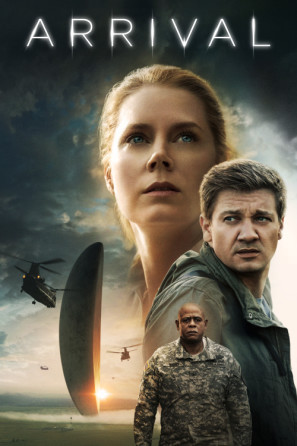 REVIEW–Today we at Marvelous Movies review Arrival, a fresh and original sci-fi drama released in late 2016. This ambitious crossover between the Marvel and DC movie universes stars Jeremy Renner as Clint Barton/Hawkeye, Amy Adams as Lois Lane, and Forest Whitaker as Zuri, warrior and advisor of King T’challa.

The story begins when a number of alien spacecraft land in various locations around the world. Zuri, one of the chiefs of Wakanda’s military, is tasked with investigating the aliens, and comes to America to recruit help. He brings in Clint and Lois specifically, probably because he knows that they’ve both had experience with alien invasions in 2012 and 2013, respectively. Also, most of the other Avengers are unavailable, as both Cap and Iron Man and Batman and Superman were busy fighting each other earlier that same year!

Zuri asks Clint and Lois to try to talk to the aliens and figure out what they want. Lois seems like an ideal candidate for making peaceful communication, as the last time she faced an alien invasion, she ended up befriending and even falling in love with a member of the invading alien race! What Zuri doesn’t realize, though, is that Lois at this time is still grieving the loss of her fiancé, as shown in 2016’s Batman vs. Superman: Dawn of Justice. This makes her emotionally vulnerable, and she does fall in love again during the course of this mission–but with Hawkeye this time instead of with an alien!

Apparently Hawkeye spends enough time apart from his wife and family, developing very close work partnerships with strong, independent redheaded women, that Lois doesn’t even realize that he’s already married. And while “Lois and Clint” does sound almost like the name of a familiar couple, we know that these two are not meant to be together (the movie even shows a future in which they’ve split up). Still, now that Superman and Linda Barton have both returned to life again, we’re hoping to one day see the fallout of this storyline in Hawkeye vs. Superman: Dawn of Trust Issues.

After months of careful study and cooperation, Lois manages to learn the aliens’ language, which also somehow enables her to see the future. Naturally, though, when she sees the then-upcoming Justice League film and the subsequent installments of the DCEU, she drifts further away from Clark and falls in love with Marvel’s characters even more!