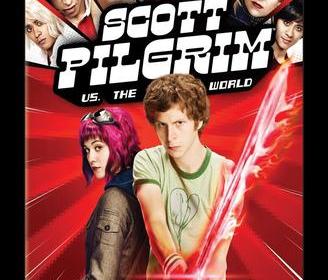 Today, we’ll review a fun but oft-overlooked film that was so early on in the lifespan of the Marvel Cinematic Universe that many audiences didn’t yet realize it was connected. That film is Scott Pilgrim vs. The World (2010), which marked the MCU’s introduction of crucial characters such as Captain America and Captain Marvel. It was also director Edgar Wright’s first foray into Marvel, before he co-wrote Ant-Man (2015). Wright is now known for his specialty of making movies about guys named Scott trying to get their pathetic lives together.

The iconic figures of Steve Rogers/Captain America (Chris Evans) and Carol Danvers/Captain Marvel (Brie Larson) are best remembered today for their solo movies. Many fans forget that they actually both premiered in this early MCU film, a year before Captain America: The First Avenger. The film follows both Captains as they battle their villainous exes, Scott Pilgrim (Michael Cera) and Ramona Flowers (Mary Elizabeth Winstead), respectively.

While the introduction of Steve Rogers and Carol Danvers is a crucial part of the MCU, it’s true that both characters are slightly under-utilized in this film. Steve’s shining moment is when he, undercover as a pro skateboarder, challenges Scott to an epic skating competition. Similarly, the film focuses more on Danvers’ musical career (before her military career as shown in her 2019 solo film) than on her superhero exploits.

The under-use of the heroes has led some casual viewers to mistakenly think that Scott and Ramona are the protagonists of this film. However, this theory overlooks the fact that Scott routinely kills his opponents by turning them into money, which is clearly something that only a villain would do. Also, his surname of “Pilgrim” is a clear and unmistakable foreshadowing of John Pilgrim, the villain in season 2 of Marvel’s The Punisher. Plus, they’re going against Captain America and Captain Marvel, both known Marvel good guys. Plus plus, Scott is just kind of a crappy person anyway (really).

One of this movie’s best features, though, was actor Brandon Routh, who played Captain Marvel’s super-powered vegan boyfriend, Todd Ingram. It’s really a shame that his character hasn’t been in any other Marvel movies since this one. He seems like he Definitely Could play a hero, and we hope he Returns in future movies, because he was Super at playing this Man. Maybe he could even join his girlfriend Captain Marvel in a similar costume of bright blue, red, and yellow. In fact, he could probably Atomize your face with his powers! If he were ever to return in a Marvel movie of Tomorrow, we think he would be a Legend.

Despite an odd focus, Scott Pilgrim vs. The World is a great introduction to Marvel’s Captains and an essential piece of the MCU. Go back and give it another watch!